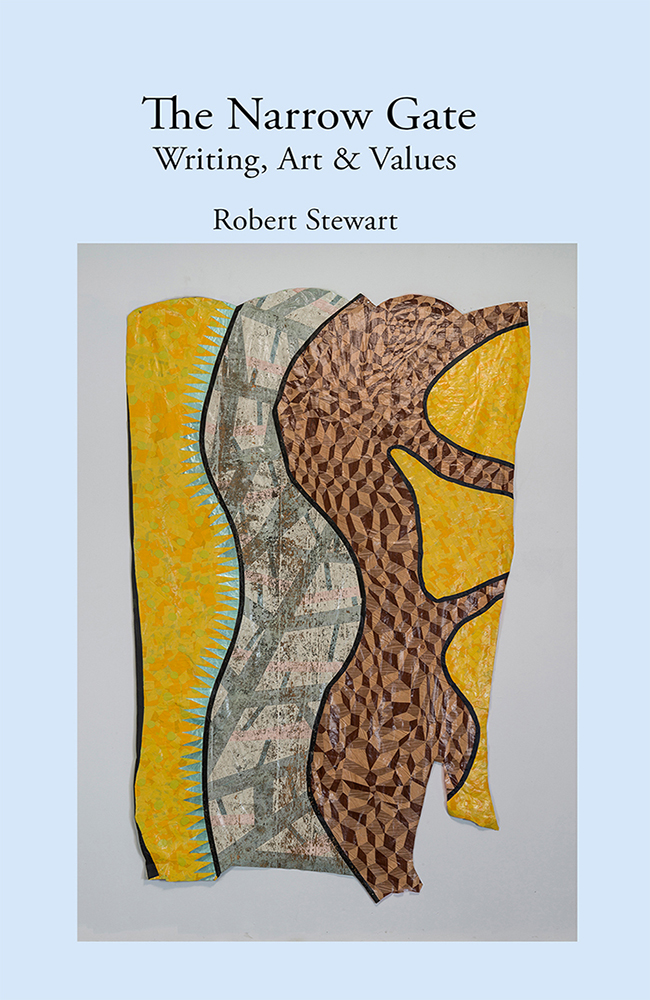 The Narrow Gate presents 19 short essays that explore ways in which literary writing and visual art affirm and clarify values, in our personal lives and in art, itself, with topics ranging from “resilience” to “madness” to “art + work.” These essays often take a personal perspective, written by the editor of New Letters, a leading journal of writing and art; they originally served as introductions to and expansions on writing and art featured in the magazine. Citing the work of contemporaries, such as Daniel Woodrell and Marilyn Kallet, and past writers, such as Cervantes and Antoine de Saint-Exupéry, the author asserts that writing and art uplift and sustain us in our relationships and spiritual endeavors. Included is a selection of art and poetry referred to in the essays.

Robert Stewart is editor of New Letters magazine, New Letters on the Air, a nationally syndicated literary radio program, and BkMk Press at the University of Missouri-Kansas City, where he also teaches poetry writing, magazine writing, and magazine editing. He has won a National Magazine Award for Editorial Achievement in the Essay category, from the American Society of Magazine Editors. His books include Outside Language: Essays (Helicon Nine Editions, a finalist in the PEN Center USA Literary Awards; and winner of the Thorpe Menn Award), Plumbers (poems, BkMk Press), and others. Poems have appeared in Denver Quarterly, The Iowa Review, Poetry Northwest, Prairie Schooner, Mangrove, Stand, Notre Dame Review, The Literary Review and other magazines. Anthology editorships include Spud Songs: An Anthology of Potato Poems (with Gloria Vando, benefit for hunger relief), and Decade: Modern American Poets (with Trish Reeves) and Voices From the Interior. He also is co-editor of the collection New American Essays (with Conger Beasley Jr., New Letters/BkMk Press).

Bob has been my primary editor at New Letters, for which I have at his behest written many essays over the years. He’s a fine essayist and poet in his own right, with a command of imagery that suggests his roots in the real working world. He has, and both his writing and his editing convey it, the old fashioned virtue of character.

As editor of New Letters, Robert Stewart has read the list, who’s on it and who waits to be named. His short takes here read as discoveries, often unexpected, and made with the fresh enthusiasm of Montaigne. He dares to step off the paved walkway of the conventional, to use his language, to offer the reader the ardor of his mind, the selectivity of his appetite.

Bob Stewart, one of the last of the great visionary editors, sets forth in these essays his arrow-sharp and deeply lived esthetic, philosophical, and moral insights. This is work by a mind that never stops working, shaping, noticing, and being present. His thinking is imbedded in a sea of places, literary, strictly real, and anecdotally fascinating. This is a collection of melancholy pleasure and true wisdom.

[Robert Stewart’s] new collection of short essays outlines issues of integrity for writers. . . . Stewart’s polished style is a pleasure to read, as is his commitment to substance. The American Society of Magazine Editors recognized Stewart with a national award for editing. This volume illustrates his excellence as both writer and editor.

Stewart reminds us of a time when editors were visionaries, rather than aggregators, when they mentored, nurtured, recognized writing that was honest and fresh, rather than seeking out the fashionable and safe. Stewart’s essays address concepts as old-fashioned as intuition, hope, engagement, citizenship, gratitude and faith—and attempt to make them meaningful in the fractured world of contemporary art and literature.