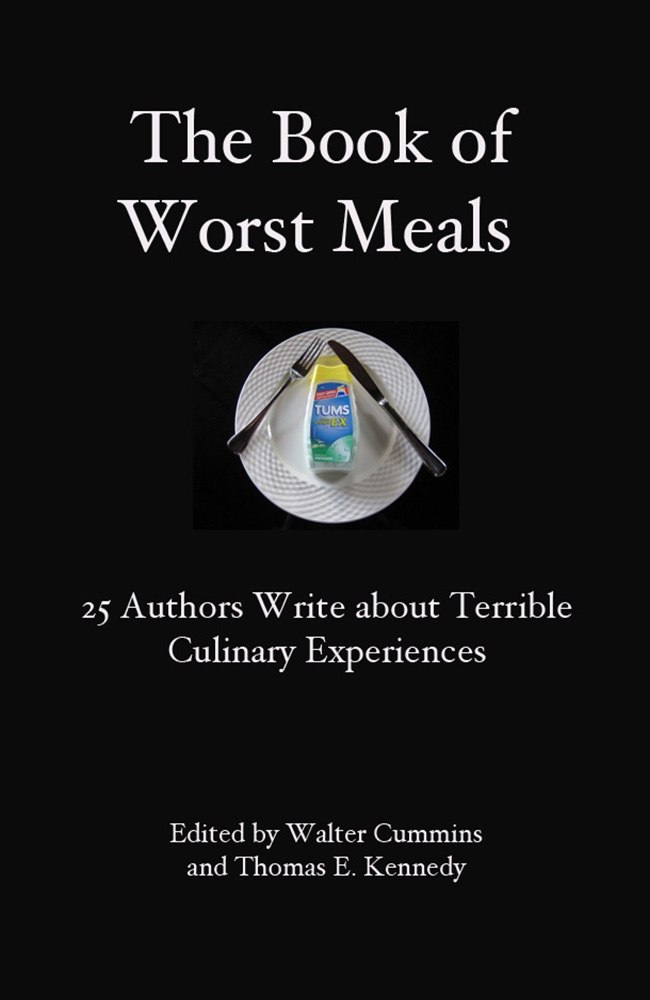 The Book of Worst Meals contains essays by 25 writers on their worst culinary experiences, tales of wretched dining in Paris, Edinburgh, Philadelphia, and throughout the UK, as well as disastrous holiday meals and the food of failed relationships.

Walter Cummins has published five other short story collections-Witness, Where We Live, Local Music, The End of the Circle, The Lost Ones, and Habitat: stories of bent realism. More than 100 of his stories, as well as memoirs, essays, and reviews, have appeared in magazines such as Kansas Quarterly, Virginia Quarterly Review, Under the Sun, Confrontation, Bellevue Literary Review, Connecticut Review, The Laurel Review, Other Voices, Georgetown Review, Contrary, Sonora Review, Abiko Quarterly, Weber Studies, Midwest Quarterly, West Branch, South Carolina Review, Crosscurrents, Crescent Review, The MacGuffin, in book collections, and on the Web. With Thomas E. Kennedy, he is co-publisher of Serving House Books, an outlet for novels, story collections, poetry, and essays. For more than twenty years, he was editor of The Literary Review. He teaches in Fairleigh Dickinson University’s MFA in Creative Writing Program.

Thomas E. Kennedy’s 25 plus books include the four novels of the Copenhagen Quartet—most recently, In the Company of Angels (Bloomsbury, 2010) and Falling Sideways (Bloomsbury 2011)—and a novel-in-essays Last Night My Bed a Boat of Whiskey Going Down (New American Press (2010). His stories, essays, and translations appear regularly in American periodicals and have won Pushcart, O. Henry, and National Magazine awards. He lives in Copenhagen and teaches in the low-residency MFA Program of Fairleigh Dickinson University.