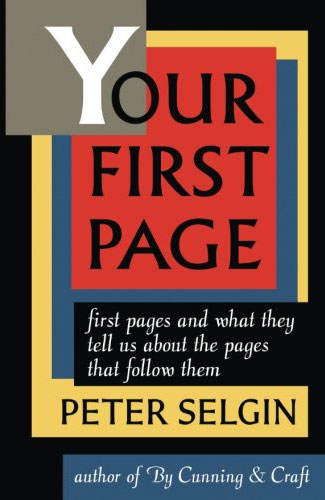 So many things happen on the first page of a book. There, within a paragraph or two, and sometimes even within the first sentence, a bond is formed between reader and writer, one that will endure — hopefully — for as many pages as the work is long.

That bond is established in a number of ways. At the simplest level, it is the same — or very similar to — the bond formed between two people when one speaks to the other for the first time. If you are walking down a city street and someone walking the other direction stops you and says, “Excuse me, can you please tell me the time?” in that instant, however briefly and tentatively, a bond is formed between you and this total stranger who demands your attention; it is up to you to decide whether and how much attention you’re willing to provide him or her. If you happen to know the time, you’ll probably extend the bond (and your courtesy) accordingly; if not, you’ll excuse yourself and continue on your way. On the other hand, had the same stranger said to you, “Hey, you! Gimme a thousand bucks!” odds are that you’d have kept walking.

In a similar way, authors make demands upon their readers. When a reader picks up a book or opens a magazine to an essay or short story, she opens herself to this interaction with a perfect stranger. Rather than meet on a street, author and reader agree to meet on a page. Once that initial invitation has been accepted, from that point on it’s entirely up the author to establish that bond and make it endure throughout the length of the work.

Though authors may make all kinds of demands on readers (“Do you have the time?” “Gimme a thousand bucks!”), readers owe authors nothing. Unless the reader is being paid to write a review, or the book is an assignment for a literature or creative writing class, the only thing compelling readers to keep reading is what’s there on the page. And what’s there on the first page is all that compels them to read the second page, and so on.

How is this bond established between writer and reader?

First, by engaging the reader’s empathy by means of a human voice speaking a shared language. When people speak to us, we tend to listen. This is no less true with strangers than it is with those we know and love. Often strangers command as much or more attention than loved ones. Excuse me, but can you tell me the time? Our shared human nature compels us to pay attention to each other, at least to where we can be fairly sure we want nothing to do with this person whose voice has reached out to us (Gimme a thousand bucks!). Up to that moment, and as long as the voice that reaches out to us is human and not that of a machine or a tape recording, since we’re human too, we are likely to pay attention.

So, the first rule for engaging and establishing a bond with your reader: speak in their language and with a human voice. That sounds easy and obvious. It’s neither. Of hundreds of stories I read every year from my students, for every one whose first sentence appeals to me with a human voice, others assail me with mannerisms, pretensions, shock tactics — i.e., with the voice of an overeager writer writing. As hard as it is to ignore a human voice (Can you please tell me the time?), nothing is easier to resist than the sound of a writer writing.

But many other things can go wrong on that first page, errors resulting in confusion, frustration, or a blurry, imprecise experience for the reader. Those countless manuscripts that editors reject daily? They’re all being rejected for the same reason: for having failed — somehow, at some level — to successfully bond with their readers.

Your First Page is unlike any other craft book on writing. It is based on the premise that almost everything that can go right or wrong in a work of fiction or memoir goes wrong or right on the first page. The book grew out of an experiment for which writers submitted nearly one hundred anonymous first pages of works-in-progress for analysis. The experiment proved two things: that first pages function like canaries in coalmines, forecasting success or predicting trouble. They establish the crucial bond between writer and reader, setting us off on a path toward the heart or climax of a story, or they fail to do so. The experiment also demonstrated that from first pages we stand to learn most of what we need to know to succeed as authors.

Peter Selgin is the author of Drowning Lessons, winner of the 2007 Flannery O’Connor Award for Short Fiction. He has written a novel, two other books on the writer’s craft, an essay collection, and several children’s books. His recent memoir, The Inventors, was named one of the best memoirs of 2016 by Library Journal. Of it the reviewer wrote, “It is a book destined to become a modern classic.” His stories and essays have appeared in The Missouri Review, Gettysburg Review, Colorado Review, Ploughshares, Glimmer Train, Poets & Writers, and other journals, and have been featured in Best American Essays and Best American Travel Writing. His plays have been published and produced nationally. A visual artist as well as a writer, his work has been featured in The New Yorker and other publications. He is an affiliate faculty member of Antioch University’s low-residency MFA writing program in Los Angeles and an Associate Professor of English at Georgia College & State University in Milledgeville, where he serves as nonfiction editor and art director of Arts & Letters.

“The straightforward premise of Peter Selgin’s Your First Page — your story or novel is as good as its first page—is ingenious, seductive and bracingly pragmatic. A boon for teachers of writing, this charming, immensely readable handbook on writing is destined to appear in countless libraries and classrooms and be given treasured space on the bookshelves of seasoned and aspiring writers alike.”

—Melissa Pritchard, author of A Solemn Pleasure: To Imagine, Witness, and Write and Palmerino

“With an emphasis on the creative process itself, I have long taught the critical importance of the first few pages of any work of fiction. What a delight to find a smart, perceptive, enormously useful book that focuses on the craft and technique issues of these same make-or-break first 500 words. I heartily recommend Peter Selgin’s Your First Page to any aspiring young writer.”

—Robert Olen Butler, Pulitzer Prize winner and author of From Where You Dream, The Process of Writing Fiction

“Like a detective dusting for fingerprints, in Your First Page Peter Selgin demonstrates how a close examination of the opening paragraphs of a story, novel, or essay can reveal much more than a beginning writer might imagine: the entire work’s DNA. In example after example, he demonstrates the kind of close reading that will serve any writer well, and offers sound advice on exposition, scene, characterization, point of view, style, and many more essential components of effective prose. Though it can serve the individual writer toiling away at home, I look forward to sharing it with students in my classes, too.”

—Peter Turchi, author of A Muse and A Maze: Writing as Puzzle, Mystery, and Magic

“Peter Selgin’s Your First Page not only reveals myriad ways to begin a narrative but how to establish a promising path toward the conclusion. A practical guide for literary writers.”

—Steve Heller, author of What We Choose to Remember

“Selgin is a champion instructor. The breadth of his reading is vast, his taste is impeccable, his ear true. This brilliant, engaging focus on, ostensibly, writing your first page, contains within it, like the submerged part of an iceberg, the whole, rounded Selgin: masterful advice to begin, and get you all the way to your story’s end. In his writing on craft, and his own works of memoir and fiction, Peter Selgin is my favorite contemporary writer.”

—Peter Nichols, author of A Voyage for Madmen and The Rocks