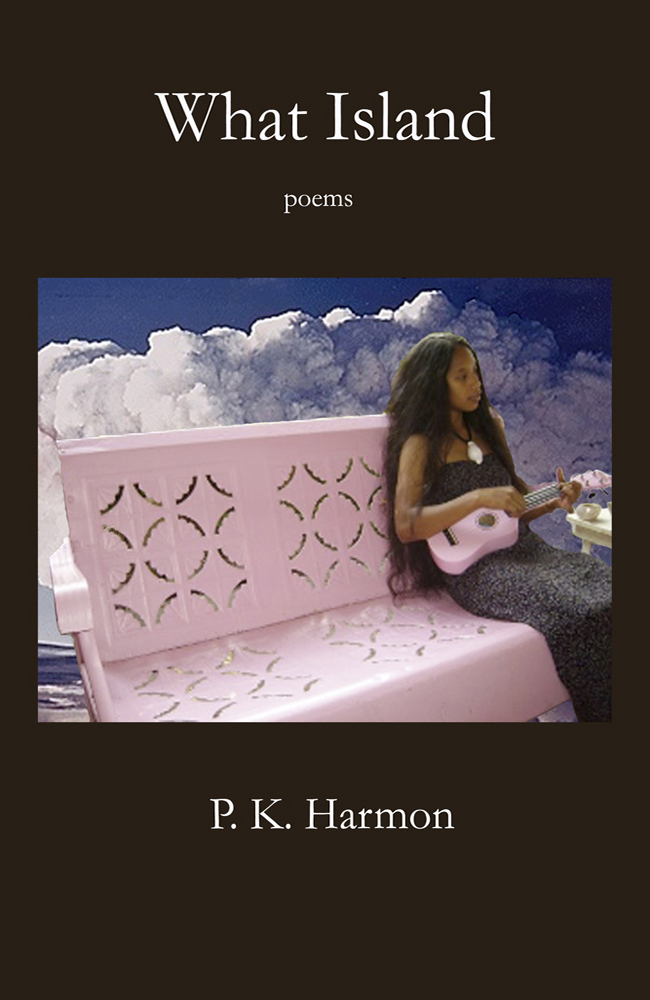 What is it like to go abroad but not for vacation? What business do we have? What right-minded, haunted search for community, for family, for social justice takes us beyond our borders, domestic rooms, and familiar walls? What responsibility is there—those of us who’ve been to the two-thirds world, met the 99%, the uninsured, the impoverished—when we arrive and hear the planet’s last message: pay attention, live on me. What W. S. Merwin has done to elevate ecology to the poetic, P. K. Harmon now takes—without bravado, without exaggeration—to the source, the sun, the tropics we’ve wanted, adorned with fantasies of leisure, then ruined. But also, despite any American devastation, what we’ve loved and longed for: “how blue / and how we turned from one / another into blue—all so blue / those old beaks cutting ahead /the flapping somehow grace too // in the flight—those two into / a deeper and deeper blue and I / drifted closer and closer // to the rough and sharp until / finally the heavy air that is / coming into a lovely silence.” What island? The ultimate answer is earth.

P.K. Harmon is the former theatre director and Humanities professor of the College of the Marshall Islands from 2001 to 2005 and was a Visiting Poet and Professor of Creative Writing for the University of Pittsburgh at Johnstown from 2006 to 2009.

Over the past twenty-five years, Harmon has lived and worked in a variety of cultures outside his native Appalachia: Guyana in South America; Istanbul, Turkey; Amsterdam, Holland; the Marshall Islands in eastern Micronesia; Guam; and Hawai’i. He has worked in the theatre during this time, both as a director and an actor, most recently in starring roles for main stage productions for the University of Guam’s Fine Arts Theatre. He is a songwriter, too, recently for the band Bikini Test Go Ahead, a do-it-yourself punk-folk affair whose offerings are apocalyptic love songs centered on the nuclear heritage of the Marshall Islands. Free downloads are available at the artists’ collective web page www.myideaoffun.org.

Born in Louisville, Kentucky in 1968, P. K. Harmon is a graduate of the Creative Writing Program at Ohio University in Athens, Ohio. In 2004, he edited an anthology of poetry by Marshall Islanders entitled Al En Aleon Kine, published by Micronitor Press. He is the winner of the 2011-2012 Serving House Fairleigh-Dickinson First Book Prize in Poetry for his collection What Island. In 2012, he was featured in YARN’s National Poetry Project “Crossing Country Line by Line”. From 2010 until 2014, he held various editorial positions for Storyboard: A Journal of Pacific Imagery, published at the University of Guam. He has had poems published recently in Riverwind, The Marshall Islands Journal, the Micronesian Educator, Blackmail Press, the Southeast Review, and Gesture Literary Review.

At present, he and his two children, both native Marshall Islanders born on Majuro, live in Mangilao on the island of Guam.

What happens to a wanderer-poet’s soul when the “lovely affliction” of personal drama is unexpectedly replaced with joy so serene it verges on boredom? “–I mean/ could I do without plot as well?/ I wake to beauty writ so large/ that the usefulness of the basic/ elements are called into question.” In these poems of inverse exile, P.K. Harmon addresses this and other dilemmas of narrative philosophy after having stumbled upon paradise in the historically shadowed Marshall Islands. What Island is rendered in exquisite lyric tones and a bold, even lightly insouciant, voice: “I finally don’t/ care there is nothing fancy/ in what I say.” This is a marvelous book.

P. K. Harmon meditates on the limits of the rational mind in its encounters with the mysteries of Nature, Chance, and Time. As he contemplates human efforts to control the energies of life, his responses range from well-informed anger at society’s destructiveness to a charming humility about the individual’s power to resist the pressures of history. Harmon’s poetry vibrates with the tension between dreaminess and responsibility; the theme is crystallized in these lines from the poem “What Foot”: “I get way out there on the water in the sky / feeling pretty beautiful actually but then look down / to my foot and the print it inevitably has to make.” Here is a poet who finds himself in a Micronesian world that is in some ways paradisal, yet threatened by economic and environmental forces that can’t be escaped anywhere. Most of the time Harmon is both amazed and happy in the choices he has made — though doubts can suddenly spring up, as we sense in “What Lagoon 3”: “Lagoon brown lagoon blue. / I am not trapped I am not / trapped I am not trapped I am / not trapped I am not.” Despite that fear, the keynote in Harmon’s vision is an affectionate bemusement which at moments attains to spiritual peacefulness — peaceful yet not sleepy — alert, humorous, ever-ready to discover hope. Readers who love William Stafford, Gary Snyder or Galway Kinnell will find Harmon’s voice charismatic, oddly authoritative, and salubrious.