The Memoir of Jake Weedsong 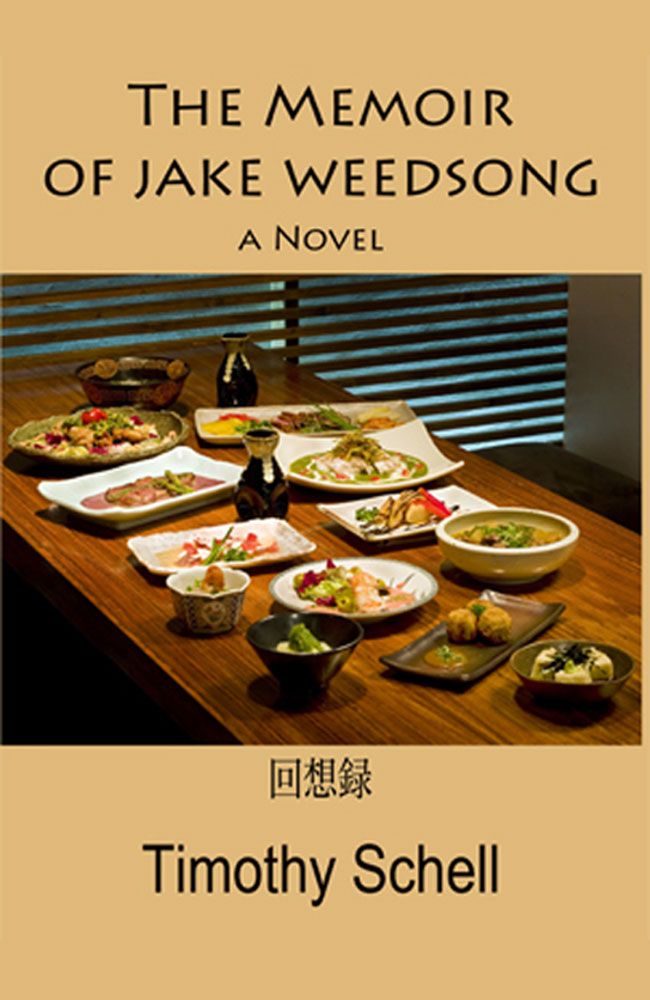 Jake and Estuko Weedsong live a bucolic life on their vineyard in rural Oregon. Having been forced out of academia, Jake spends his days working on a memoir, much of it comprised of his years living and teaching in Japan where he married Etsuko some twenty years earlier, married her three times on the same day, in fact.

As the novel opens, Jake and Etsuko have been attacked by three skinheads in Portland. The three boys are found guilty of a hate crime, and at the sentencing hearing Etsuko convinces the judge that a prison sentence will only further reduce the boys’ humanity. Instead, Etsuko would like the boys sentenced to a traditional Japanese dinner at her house where they will be dressed in kimonos and immersed in Japanese culture. While Jake finds Etsuko’s plan to teach the boys to empathize naïve, he reluctantly acquiesces, and the dinner date is set. In attendance will be Oregon’s poet laureate Gunnar Hoagard and his wife Karla, Jake and Etsuko’s daughter Elin, and Etsuko’s parents who are visiting from Japan.

Two Japanese women, Etsuko and her mother, work with fervor in their preparation of a feast where three of the honored guests are racist boys. This is the story of love and friendship and of the food that nurtures the greatest hopes and desires that hate can be overcome.

Timothy Schell is the winner of the Mammoth Book Award for Prose for his novel The Drums of Africa (2007) and is the co-author of Mooring Against the Tide: Writing Fiction and Poetry (Prentice Hall, 2007) and the co-editor of the anthology A Writer’s Country (Prentice Hall, 2001). His fiction has been nominated for a Pushcart Award and he was the winner of the Martindale Award for Long Fiction. He teaches literature and writing at Columbia Gorge Community College in Hood River, Oregon. The Memoir of Jake Weedsong was the 2010 Finalist for the AWP Award for the Novel. Photo by Maya Schell.

Jake Weedsong is that rare thing: a good man. He’s a guy I’d love to hang out with, and his story is absolutely capturing. The extremity of love and the beneficence of a good life — mind and body — are met in this terrific and dear novel with what seems at first to be the relentless edge of inevitable harm in a breathtaking mix. This isn’t just the heady clash and fusion of two cultures, it is a radical look at the essence of culture itself. Only Tim Schell could go deeper and deeper into the dark and have the results glow the way this fine book does.

—Ron Carlson, author of The Signal

I like the wry assurance of the narrative voice, the flashes of humor, the frequent and almost compulsive comparisons between Japan and America.

Tim Schell’s first novel The Drums of Africa is a gripping and timely tale of two young Americans, Val and Glen, arriving in Africa as Peace Corps Volunteers in the 1970’s, willed with altruism, naivete and a thirst for adventure. As the line between adventure and catastrophe narrows, Schell masterfully creates a mosaic of cultural perspectives and ethical tensions between faith and its lack, politics and revolutionary coups, lust and love set against an exotic backdrop rife with sorcerers, priests, corrupt politicians, poachers, coffee farmers, Peace Corps workers and prostitutes, a place leading each character inward to unexpected self-revelation and self-sacrifice. A richly panoplied novel, alive with sensuous detail and compelling narrative, The Drums of Africa is both an adventure tale and a philosophical rumination on the power of crisis and contradiction to test and ultimately transform ideals, laws, ancient instincts, faith and the challenge presented by human love met by human courage.