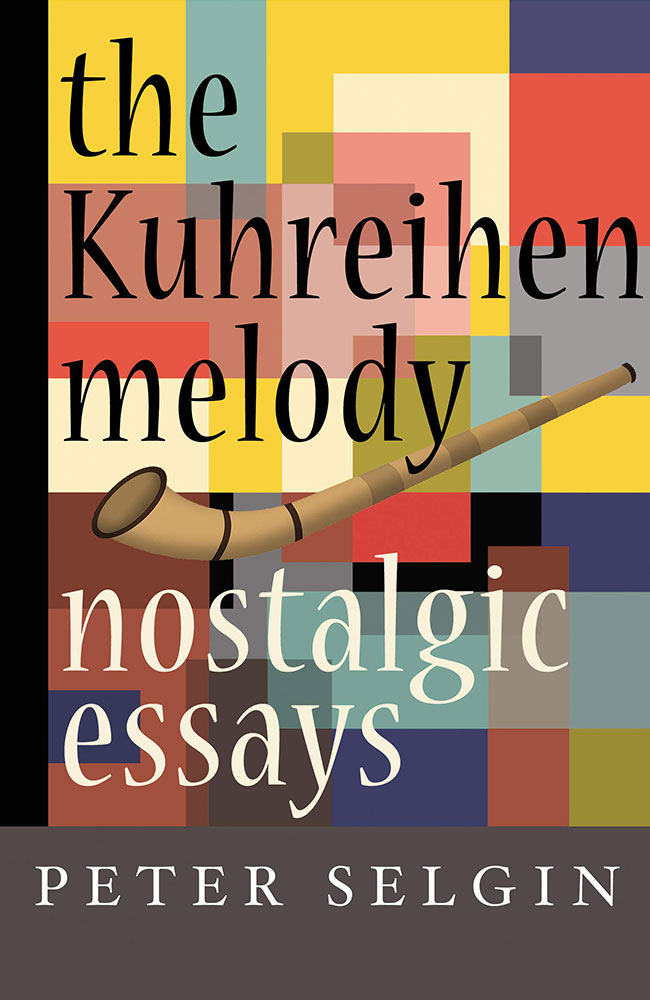 Once considered a disease, nostalgia has been described as a yearning to return to “a past that never was, “a place that can only be reached through the imagination. In its fifteen essays, The Kuhreihen Melody examines nostalgia from various angles through an array of lenses. In the title essay, the author revisits his ghost-ridden hometown. “Swimming with Oliver” presents a mosaic of memories of his watery friendship with author-neurologist Oliver Sacks .”The Strange Case of Arthur Silz “investigates the six¬ty-year-old murder of a Greenwich Village artist on a mountain in Mexico, while “The Opening Credits of Rebel Without a Cause” conducts a granular dissection of the first minute and twenty-three seconds of that iconic American film. From barbershops to stripes to a boy’s drowning death blamed on the author, The Kuhreihen Melody turns a wistful eye on bygone people, places, and things, and finally on nostalgia itself.

Peter Selgin is the author of Drowning Lessons, winner of the 2007 Flannery O’Connor Award for Fiction. He has written a novel, three books on the craft of writing, and several children’s books. Confessions of a Left-Handed Man, his memoir-in-essays, was a finalist for the William Saroyan International Prize. His memoir, The Inventors, won the 2017 Housatonic Book Award and was voted one of the best nonfiction books of the year by Library Journal, whose reviewer called it “an instant classic.” His full-length drama, A God in the House, based on Dr. Jack Kevorkian and his “suicide machine,” premiered at the Eugene O’Neill National Playwrights Conference and was optioned for Off-Broadway. A visual artist as well as a writer, Selgin’s paintings and illustrations have been featured in The New Yorker, Forbes, Gourmet, Outside, and other publications. He is an Associate Professor of Creative Writing at Georgia College and State University in Milledgeville, Georgia, where he is the nonfiction editor of Arts & Letters, an international journal of poetry and prose.

Titled after a 17th century Swiss cattle herding song that, when heard, produced an intense nostalgia or ache to return home, The Kuhreihen Melody is a collection of fifteen truly brilliant essays that explore the longing to return to a home or a place that never really was. Reminiscent of W.G. Sebald and other masters of describing the acute “nothing,” the unrecoverable and impermanent, Peter Selgin patiently–-and always entertainingly—uncovers nostalgia’s complex, contradictory relationship to time. Selgin’s recall of his own past is as eidetic as Proust’s, and whether he is writing of his childhood, his history of swimming with Oliver Sacks, his romance with New York City, a history of vests or the pleasure of stripes, Selgin, also an artist, is irresistible, colorfully philosophical and frequently profound.

—Melissa Pritchard, author of Palmerino and A Solemn Pleasure

The riveting quality of this startling collection of essays strips it of even a whiff of sentimentality. Selgin understands that nostalgia means ‘the return of pain’; that it is in longing that we discover the existential grief of being human. Desire weaves its way through this book like a river.

Listen: Peter Selgin has come unstuck in time, time being the fourth dimension of being. But way beyond that the essays found in The Kuhreihen Melody suggest a whole new saturated string theory of remembering. Into rivers that we cannot step into twice, Selgin choreographs a bevy of these sublime plasmatic memoirs, a squad of synchronized swimmers, syncopated and panting, doing a solid time step with a murmuring heart in the deep end of congested confluences, pooling estuaries of emotion. Buoyant and effervescent, rip-tided and torpedoed, the melodies herein are as persistent (and resistant) as forever and so beautiful, beautiful enough to launch 1,000 clocks.

—Michael Martone, author of The Moon Over Wapakoneta and Brooding

Such strong, vivid, haunting stories. Whether set in wintry 1970’s Brooklyn or sultry New Orleans or the jungles of Mexico or in the streets of a vanished hometown, Selgin’s tales convey the texture of the human condition in ways that make each a singular, indelible experience.

—Peter Nichols, author of The Rocks

“Be at life’s mercy,” young, wannabe-actor Peter Selgin is told by a New York casting agent in “The Bones of Love,” one of fifteen “nostalgic essays” in this wonderful collection that is, by turns, harrowing and delightful, heartbreaking and comical, gritty and erudite. As deceitful as those words may have been, the advice is sage. And Peter took it–is haunted by it, in fact–remaining vulnerable despite his scars to life’s pleasures and pains, triumphs and tragedies as he struggled to fathom the man he was, is, and wants to be. It is tautological to point out that doing so he must indulge in nostalgia, a word that has in serious literary circles been spelled with four letters for quite some time. Peter, however, redeems nostalgias through an alchemical mix of wide-ranging curiosity, nimble intelligence, candidness and felicity, turning it into the gold of these vital, magical essays.