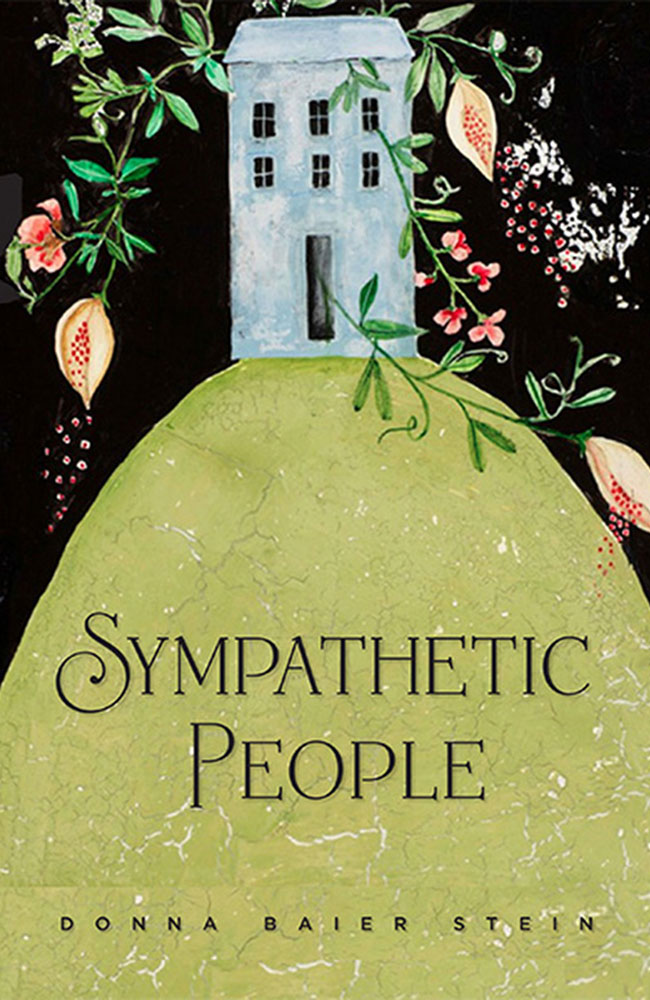 Sympathetic People was named one of four finalists in the 2015 Next Generation Indie Book Awards in the Short Fiction category, and the book’s coverby Allen Mohr was also selected as a finalist for cover design.

Both the beauty and frailty of human connections are seen in the thirteen stories collected in Sympathetic People. Here are women and men struggling to find love, meaning, happiness in marriage, adulterous affairs, art, meditation, and even the passage from life to death. Longing generated by loss is everywhere–in the death of a son, the end of a marriage, the slide from hope ignited by Neil Armstrong’s moon walk to hopelessness after President Kennedy’s death.In “Hindsight,” Jessie, a hippie in Lawrence, Kansas, opts for what she assumes is stability in a world of change, only to be brought up short years later when her life veers off its predicted path. “The Secrets of Snakes” reveals the early ruptures in a marriage and a wife’s futile attempts to stop them even as she tries to care for her son’s pet racer. In “The Jewel Box,” a grandmother promises to let her granddaughter know what Heaven is like after she passes and if, in fact, it looks like the Art Deco greenhouse built in St. Louis during the 1904 World’s Fair. And in “Versions,” a newlywed in Plano, Texas, entertains her sometimes angry husband’s first wife and realizes too late what she has given up in choosing him.

“The Second Time the Bird Escapes” brings the collection full circle as a woman vies for attention with her husband’s new girlfriend and watches a peacock race across the yard to freedom, its dazzling tail open like an invitation.

Donna Baier Stein’s writing has appeared in Virginia Quarterly Review, Kansas Quarterly, Prairie Schooner, Washingtonian, and many other journals and anthologies. She has been a Finalist in the Iowa Fiction Awards and received the PEN/New England Discovery Award for Fiction, a Johns Hopkins University Writing Seminars Fellowship, Bread Loaf Scholarship, a grant from the New Jersey Council of the Arts, prizes from the Poetry Council of Virginia, two Pushcart nominations, and an Honorable Mention in the 2013 Allen E. Ginsberg Poetry Awards. Her poetry chapbook Sometimes You Sense the Difference was published in 2012. Donna was a Founding Editor of Bellevue Literary Review and founded and currently publishes TIFERET. She is also an award-winning direct response copywriter.

Donna Baier Stein uncovers the sometimes heady glint of danger in relationships in a brilliantly edgy collection of stories that gets under your skin as even as it illuminates love, lust–and everything in between.

—Caroline Leavitt, New York Times bestselling author of Pictures of You and Is This tomorrow

Donna Baier Stein writes with the grace and precision of a poet, but also with a cool intelligence that creates intriguing stores that engage immediately, hold throughout, and, best of all, resonate in a reader’s mind long after their conclusion. Here is a writer who trusts not only herself, but her readers, who, rather than feel beaten about the head with an author’s “message,” will instead be skillfully guided into coming to their own satisfying conclusions.

Ms. Stein’s stories are powerful in both language and character. Each story offers a life of yearning that fits all ages. Through a sharp lens of wit and intelligence, her characters play out their lives in both negative and positive ways. Ms. Stein balances a fierce wish to love and to be loved with a the hard reality of loss and failure, yet the yearning does not diminish. A profound accomplishment.

—Elizabeth Cox, author of The Slow Moon and The Ragged Way People Fall Out of Love

Donna Baier Stein is a discovery. Her deceptively mild story-telling veers swiftly into the savage but often unacknowledged discontent of suburban life—wives dabbling with drugs and alcohol, struggling with marital disappointment and missed opportunities, celebrating and often betrayed by unexpected friendships—all explored with language that engages and surprises.

It is a wonderful woven book of short stories about life and all its intricacies. The author took the time to cultivate each character and storyline, making the reader CARE about the stories themselves. The events and feelings that are experienced and absorbed by the characters are simultaneously felt by the reader. This is exactly what should happen in a book.

This is an interesting series of stories showing the emotions we all go through. Some stories will have you cry, some smile and some wonder about the decisions some make. Each story shows the consequences of someone’s actions and what can happen when you face a fork and must decide what to do. The meaning is greater than what is seen for there is a hidden meaning in each decision and story. This is a collection of stories that will have you thinking deeply.

To read Sympathetic People is to immerse oneself in the figurative language, authentic characters, and realistic tales of author Donna Baier Stein. Stein relies on first person narration throughout the collection, giving voice to women dealing with life experiences of marriage, motherhood, divorce, and death. The action is retrospective, reflective, and reminiscent of Anne Beattie’s work. […] These characters are sympathetic without being pitiful. There’s not the happily ever-after promised; rather, there’s an edginess that is heightened by the bit of endnote considerations, such as the yellow lights of indecision and the “collective hunger of the times.” Her stories strike a chord of realism and balance and readers of certain age (like me) can identify with many of the circumstances of her work and nod in agreement at the narrator’s reflective concluding comments. This is a most satisfying read.