Scenes from the Heartland 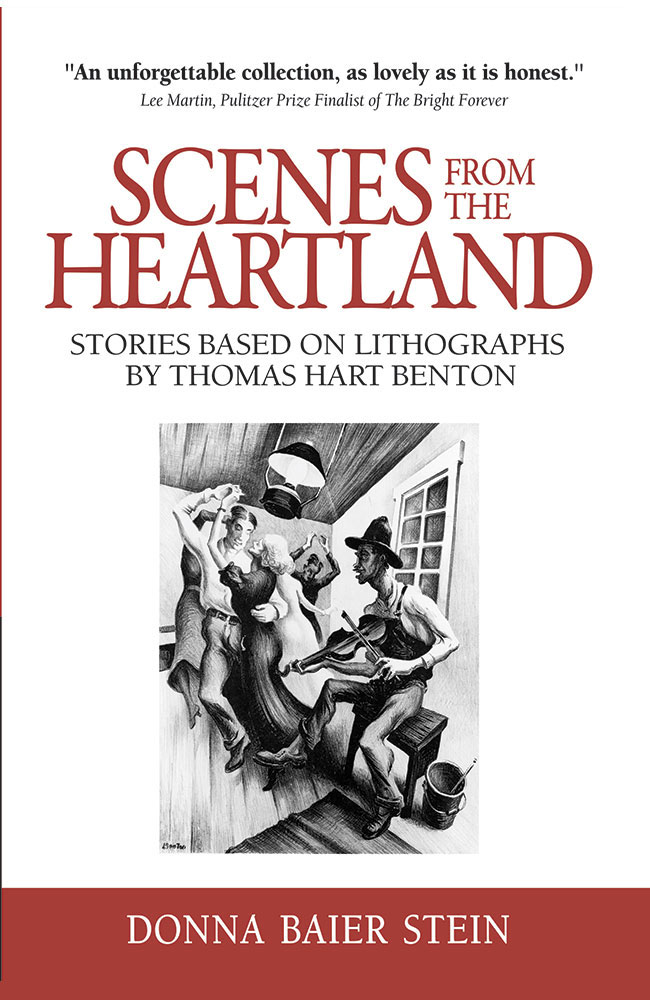 When a contemporary writer turns her imagination loose inside the images of an iconic artist of the past, the result is storytelling magic at its best. Here are nine tales that bring to vivid life the early decades of the 20th century as witnessed by one of America’s most well-known painters. Thomas Hart Benton sketched fiddlers and farm wives, preachers and soldiers, folks gathering in dance halls and tent meetings. Though his lithographs depict the past, the real-life people he portrayed face issues that are front and center today: corruption, women’s rights, racial inequality.

In these stories we enter the imagined lives of Midwesterners in the late 1930s and early 1940s. A mysterious woman dancing to fiddle music makes one small gesture of kindness that helps heal the rift of racial tensions in her small town. A man leaves his childhood home after a tragic accident and becomes involved with the big-time gamblers who have made Hot Springs, Arkansas, their summer playground. After watching her mother being sent to an insane asylum simply for grieving over a miscarriage, a girl determines to never let any man have any say over her body.

Then as now, Americans have struggled with poverty, illness, and betrayal. Thesefictions reveal our fellow countrymen and women living with grace and strong leanings toward virtue, despite the troubles that face them.

Scenes from the Heartland is an unforgettable collection, as lovely as it is honest, refusing to sentimentalize, transcending nostalgia, and looking directly at the riven, triumphant, glorious hearts of its characters. Donna Baier Stein provides a necessary reminder of everything we share, no matter how distant we may be in time or place.

In this gorgeous collection, Donna Baier Stein teases out the depth and humanity hinted at in Hart’s two dimensional art, using each lithograph as a portal into a vivid, fully fleshed out world. Scenes from the Heartland is brimming with marvelous, generous scenes that truly do come from the heart.

—Gayle Brandeis, The Art of Misdiagnosis

Inspired by nine iconic lithographs, Donna Baier Stein indelibly imagines the forgotten lives of rural men and women in the early, backbreaking decades of the Twentieth Century. These stories of hardship and survival, of passions simmering under a roughshod surface, of alcohol-fueled cruelties and simple acts of kindness, both capture an era and transcend it. Scenes from the heartland, indeed.

If Thomas Hart Benton’s artwork could talk, I believe it would sound like Donna Baier Stein’s prose–plainspoken, vivid, generous, and honest. The nine stories in this collection–which use Benton’s lithographs as imaginative springboards–form a vibrant patchwork quilt of small towns, county fairs, and rural dance halls peopled by fiddlers and farmers, gas jockeys and traveling preachers. To read this book is to be transported, by Baier Stein’s masterful storytelling, to the American heartland of a bygone era. I, for one, did not want to leave.

—Will Allison, What You Have Left and Long Drive Home