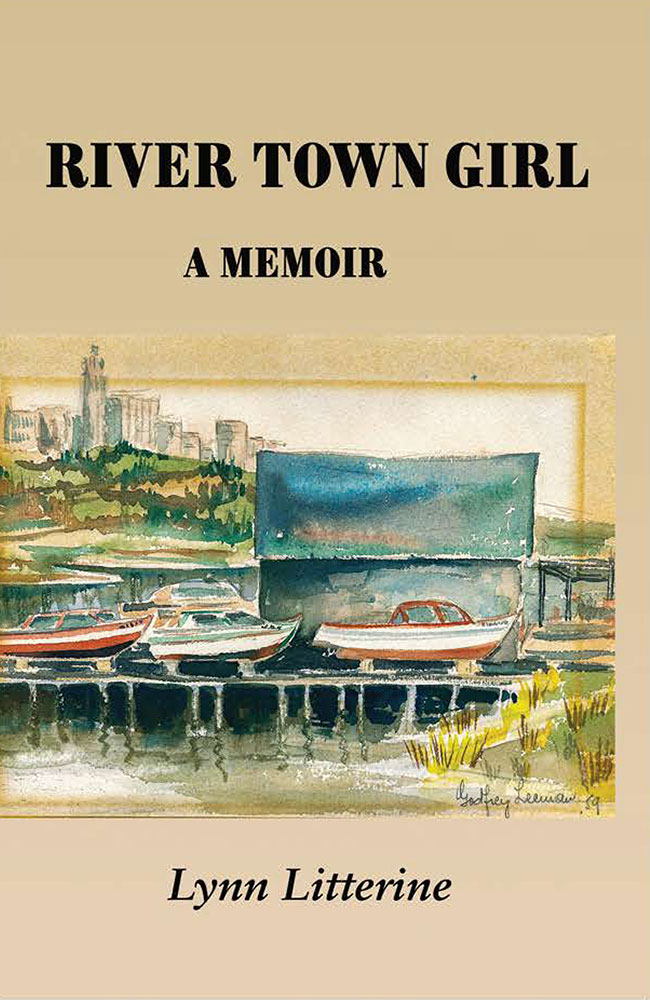 One of Kirkus Reviews’ Best Indie Books of 2020

River Town Girl: A Memoir is about growing up in a small, working-class town on the Hudson River in the 1950s, ‘60s, and early ‘70s. One mile away across the river is New York City, but it might just as well be a thousand miles away. The town, Edgewater, has 4,000 people. Cut off by the river, which runs along it on the east, and the Palisades cliffs, which run along it on the west, it is rich in eccentric characters, and its life is shaped by the rhythms of the Hudson. The town is fertile ground for the delights and the powers of story telling. Today that version of the town is gone, buried under New Jersey’s high-rise Gold Coast.

This story is about how a child of the 1950s becomes an adolescent of the 1960s and gradually but finally finds the strength to finish growing up.

A bookish only child, the power of words to make sense of the world is life saving for her. In her books as a child and in her mother’s stories and her father’s journals, she comes to know a self both damaged and resilient. Later stories told in psychotherapy make sense of the overwhelming anxiety that threatens her. Then the stories she writes as a newspaper reporter lead her into city rooms that become her second home and into assignments that usher her into a larger world.

The author treats memory as more episodic and fluctuating than traditional narratives do. Written in prose, poetry, lists, fragments, and dialogue and in both facts and imaginings, this patchwork creates a complex, coming-of-age story about a girl, a family, a town, a river, and a time now gone. It does so in carefully crafted language that seeks to delight readers. What many people know about the lower Hudson Valley may begin and end with the Clearwater sloop, but the full breadth of these lives lived along the river goes well beyond.

Lynn Litterine has been a journalist and a writing teacher.

Both dazzlingly imaginative and comfortingly nostalgic.

This is an exquisite book, an intelligent and thoughtful look into a woman’s life that will reward any reader, not just those close to the Hudson Valley. Litterine masterfully combines words and images to present a vision that begins with the history of the river town where she grew up then spirals inward. Playing with the collapse of time, we are gifted with a keen perspective that ranges from the historical to the geographic to the personal and communal.

This is a beautiful, moving, and sometimes heartbreaking account of what it was like to come of age in a working-class New Jersey town in the 1950’s and 1960’s. The writing is luminous and evocative, and the author’s eye for detail is remarkable. You’ll feel as if you’re transported back to another era, to a world filled with both pain and delight.

—Constance Rosenblum, author of Boulevard of Dreams: Heady Times, Heartbreak, and Hope Along the Grand Concourse in the Bronx

Beautifully illustrated, it’s a seamless mix of town and family history, vivid characters with their own points of view, and surprising revelations. With the river as the memoir’s organizing principle, the reader floats through Litterine’s life from girlhood to womanhood in a working-class town across from Manhattan, a town which changes so completely, it’s now called the Gold Coast. No one has written about this place, this time, this way.

—Susan Coll, author of The Stager