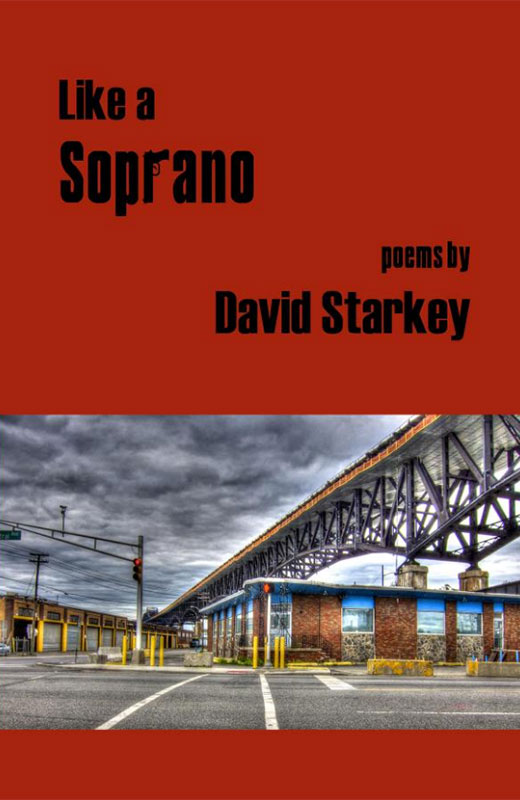 After the death of James Gandolfini in the summer of 2013, David Starkey decided to pay poetic homage to The Sopranos TV series and its star. Like a Soprano features one poem for each episode, with the poem sharing the episode’s title. Like the series itself, the poems are by turns violent and sexual, comic and absurd. Never before has an entire television program received such close attention from a serious poet: this is a landmark in the crossover between poetic and popular culture.

David Starkey directs the creative writing program at Santa Barbara City College and served as Santa Barbara’s 2009-2010 Poet Laureate. He has published seven full-length collections of poetry, most recently Circus Maximus (Biblioasis, 2013) and It Must Be Like the World (Pecan Grove, 2011). In addition, over the past twenty-eight years he has published more than 400 poems in literary journals such as American Scholar, Antioch Review, Barrow Street, Beloit Poetry Journal, Cincinnati Review, Georgia Review, Massachusetts Review, Notre Dame Review, Poetry East, Southern Review, Southern Humanities Review, and Southern Poetry Review. Creative Writing: Four Genres in Brief (Bedford/St. Martin’s, 2012) is in its second edition and is currently one of the best-selling creative writing textbooks in the country.

It gives me much pride and joy to know that The Sopranos is now muse to a poet. Like a Soprano is an episode by episode distillation of the series into a potent, loving and inspired spirit. Buon’ anima!

Much more than a summary of The Sopranos, the legendary cable-TV game-changer, this sequence of prose poems presents an interior monologue in the voice of Tony Soprano, spoken in second-person by Tony’s meditative self, as if in a fugue state in his shrink’s office, or better, writing it all down in a notebook, to save his life. Its 83 intense word-packages (prose, but never prosaic) present the spit on which all bodies turn: loyalty, depression, angst, love, lust, sentimentality, courage—and, rarely, a break in the clouds: ‘… [B]reathe in the reassuring smells of cigar smoke and dried manure and fresh hay. Tomorrow you’ll collect outstanding debts. Not today.’ I found no false step here in the language; these poems are cut and polished, and absolutely in character. More than a remarkable book, it’s a thrilling one. The humor is mordant (‘You suspect the Chicken Vindaloo was actually Cocker Spaniel’), the language sharply varying from imagistic (‘flush with crackheads’ small bills’) to a staccato-Hammett ‘cracking wise’ (‘Come on: he can only play that poor-me, ex-con cousin card so long’), to thoughts too deep for words, where waves crashing on the beach bring memories of those you’ve whacked and sunk in chains. This is a comic masterpiece, which is to say, it’s a tragedy, too.

—James Cummins, author of Still Some Cake, Then and Now, and The Whole Truth

In these clean, sparse prose poems, David Starkey takes the reader into the dark, violent mindset of thieves, thugs and mobsters with the small, most insightful and telling details of their troubled lives. Like a Soprano is as a whole a tough, hard story of guilt and conscience beautifully told.

As a Sopranos fan, [I found] this book was a delight to read—not only for its evocation of the show (each poem is titled after the series’ episodes and sequenced in that order), but also for Starkey’s perceptions and meticulous attention to detail. I revisited the series here, but with David Starkey as my companion and guide. He’s a street-smart, modern day Tiresias leading us back through this underworld, at every stop offering, rather than recapitulations, visions that are commentary and poetry at once.

With quick-witted language, like that of an Italian mobster, Starkey’s precision demonstrates tasteful texture that not only matches that of the original episode, but allows the reader to delve deeper into the psyche of Tony Soprano.