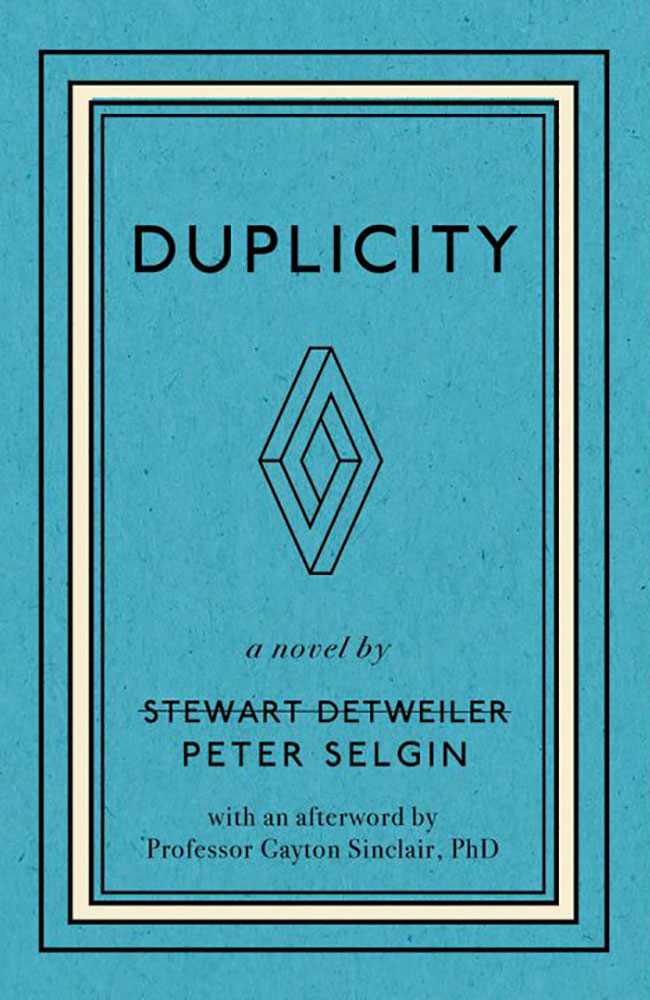 Dispatched by their mother to learn why his estranged twin brother Gregory (or “Brock Jones, PhD,” as he’s known to fans of his bestselling self-help book Coffee, Black) has disappeared, Stewart Detweiler drives 1,500 miles to find his twin hanging from a ceiling beam in their deceased father’s lakeside A-frame. But instead of reporting him dead, Stewart decides to become him. As he sees it, he’s not taking his brother’s life; he’s saving it. In turn he will at last gain an audience for his novel-in-perpetual-progress the plot of which bears an uncanny resemblance to this one. At first Stewart’s plan goes smoothly. But before long the motives behind his brother’s suicide emerge, pointing to intrigue, extortion, and desperate measures taken with disastrous results. The bonds of family; success and failure; philosophy and quantum mechanics; the ways in which we can — and cannot — rewrite our own lives: DUPLICITY weaves all of these together while vivisecting its own genre.

DUPLICITY was a semi-finalist for this year’s Elixir Book Prize and has also been short-listed for the 2020 Steel Toe Book Books 2021 Prize. It was also a finalist for the 2019 Craft First Chapter Contest.

Peter Selgin is the author of Drowning Lessons, winner of the 2007 Flannery O’Connor Award for Short Fiction. He has written a novel, three books on the craft of writing, two essay collections, plays, and several children’s books. Confessions of a Left-Handed Man, his memoir-in-essays, was a finalist for the William Saroyan International Prize. His memoir, The Inventors, won the 2017 Housatonic Book Award. His essays have appeared in the Colorado Review, Missouri Review, Gettysburg Review, The Sun, Best American Essays and Best American Travel Writing. His illustrations and paintings have been featured in The New Yorker, Forbes, Gourmet, Outside, Boston Magazine, The Wall Street Journal, and elsewhere. He is Associate Professor of Creative Writing at Georgia College and State University in Milledgeville, Georgia, where he is nonfiction editor and art director of Arts & Letters, the international journal of poetry and prose.

Duplicity is a hall-of-mirrors metafictional masterpiece in which everything has its equal opposite and nothing is quite what it seems. Peter Selgin has found the perfect narrator for his fratricidal-suicidal romp: the dark, mordant, too envious, too inventive, Stewart Detweiler, who lurks in the black, jealous heart of every writer whose cloistered brilliance remains unseen and rebuffed by the world. Here is Stewart’s brief moment in the sun, his chops and voice unfettered at last, and to the end — and we are dazzled.

— Peter Nichols, bestselling author of The Rocks and A Voyage for Madmen

Duplicity is an entertaining ouroboros of a book — a cleverly collated confession that takes its rightful place in a tradition of doppelgänger-haunted novels that reflect on the instability of identity and the inadequacy of language. While poking gentle fun at plot, clichés, and other elements of conventional mainstream fiction, Selgin harnesses those same workhorses to his suspenseful tale. Smart, funny, satirical, and yet heartfelt, Duplicity is a book worth reading twice: once as a metafictional page-turner about twins, accidental criminality, and mid-life malaise, again as an instructive treatise on writing itself.

— Andromeda Romano-Lax, author of Annie and the Wolves and Behave

How to write a blurb for such a stunning novel? Duplicity is dauntingly brilliant. Twins may be at the novel’s center — equal and opposite twins colliding — but Duplicity is utterly, deliciously, singular. It should be taught in both literature and creative writing classes in perpetuity!

— Gayle Brandeis, author of The Art of Misdiagnosis

Duplicity explodes every rule of the novel, written and unwritten, through sins of omission and commission. It makes a cat’s toy of clichés and inflates conceits expressly to puncture them. It breaks the spell of its creation, only to take up the strands and weave them into a more complex enchantment. This is no accident. Peter Selgin is a master who engages the possibilities of the novel from the inside out. Duplicity is for anyone who has seen through a novel, and for anyone who has found a world in one.

Stewart Detweiler dreams of writing a book that ‘no matter how many times you open it, or what page you open it to, it feels like you’ve never read it before.’ In Duplicity he lives the dream. Selgin / Detweiler promises you, Dear Reader, ‘the single most unreliable narrative ever composed,’ and assures you that he is not to be trusted. He is a man of his word. Book A does indeed falsify Book B. And Book B verifies Book A. Their name is Duplicity, for they are one. Each is absorbed by its equal opposite. And so will you be.

Darkly exuberant and completely riveting, Duplicity breaks through the metaphorical fourth wall, wrestling with the boundaries of identity, the precariousness of reinvention, and the nature of fiction itself. Peter Selgin’s storytelling mastery is on full display in this provocative meditation on the writing life.

Wicked, intimate, and hilarious, Duplicity is a compendium of good advice about writing and plain bad intentions. Its narrator, Stewart Detweiler, who appears to be a descendent of Poe’s William Wilson and a long-lost cousin of Nabokov’s Humbert Humbert, is tricky, tricky tricky. ‘Dear Reader’ (as Stewart likes to say), prepare yourself for a wild ride.