Down to Earth (A Book of Improvisations) 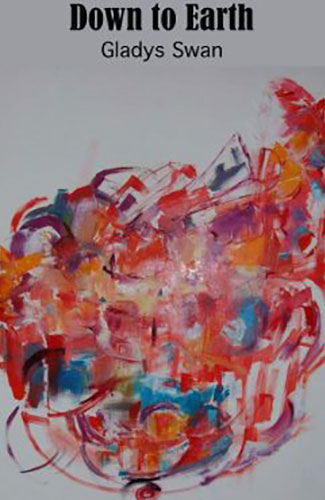 The Kid wanted to do something for me—and the question was, would I let him? He’s on his way up in the world these days, and there’s no telling how high he’ll soar. I figure he’s got the goods, but when I put my mind around what he’s aiming to do, my breath catches. Really what Dusty struggled to do on the grand scale—take the world by the tail and change things at the core. It takes a kind of high-feathered ambition all right—to think you’re the one who’s going to make a difference. On the outside it looks like arrogance. And it takes a powerful imagination
Author: Gladys Swan
Paperback : 202 pages
ISBN-10 : 1947175041
ISBN-13 : 978-1947175044
Gladys Swan has published six novels, Carnival for the Gods (Vintage Contemporaries Series), Ghost Dance: A Play of Voices (LSU Press, nominated for the PEN/Faulkner Award), A Dark Gamble, Small Wonder, and Dancing with Snakes, as well as seven collections of short fiction. Her poetry and essays, and short stories have appeared in many literary magazines and anthologies. Much of her work is set in New Mexico, where she grew up. Though she has spent most of her career as a writer, she has devoted much of her time during the last two decades to painting and exploring the creative process. She was the first writer since the inception of the Vermont Studio Center to receive a fellowship for a residency in painting. She also received a fellowship from the Lilly Endowment for a year’s study of Inuit art and mythology and a Fulbright Award as a writer-in-residence in Yugoslavia. Her paintings have appeared as the cover art for various literary magazines and books, including the most recently published, The Tiger’s Eye: New & Selected Stories. She has twice been a Guest Writer at the Vermont Studio Center and has held residencies at Yaddo, the Chateau de Lavigny in Switzerland. the Fimdacion Valparaiso in Spain and others. She has taught literature and creative writing at various colleges and universities, notably, in the MFA Program at the Vermont College of the Arts and at the University of Missouri-Columbia. She received an Honorary Doctorate of Humane Letters from Western New Mexico University and gave the commencement address. The Carnival Quintet, an outgrowth of her first novel, is being published by Serving House Books. The first volume, Carnival for the Gods, appeared in September, 2014. She has done the cover paintings for the series.

Swan keeps the men and women in her sensuous, bittersweet stories dreaming and reaching, in the very best traditions of American storytelling.

An ambitious, off-beat novel with a strong cerebral bent, Swan’s GhostDance challenges the reader to take a different look at the modern-day West.

Gladys Swan is an author who conjures the power of time, memory, and the past in the heart of her work. Swan says, “I’m convinced that there are spiritual realities that we can potentially apprehend, and they certainly belong to a mystery. The past is part of that mystery.”

. . . her narrative poses sophisticated questions about dreams, illusions, art and even magic. . . . It’s hard to imagine a dreamer not falling head over heels for this adult fairy tale.

In these times of so much “throwaway fiction” Swan’s collection shines with the timeless luster of well polished prose and a true ken for storytelling.