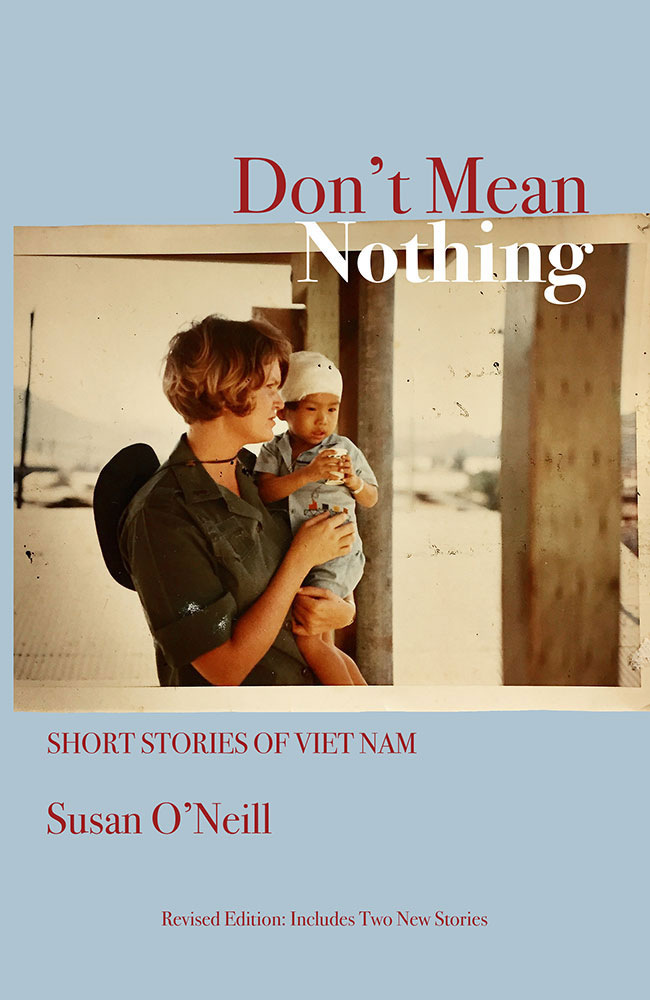 Susan O’Neill’s Don’t Mean Nothing, a powerful story collection now in a Serving House Books edition after initial publication by Ballantine Books and then the University of Massachusetts Press, is the first work of fiction by a woman who served in Viet Nam, revealing much about that war from a fresh and original perspective.

Susan O’Neill spent a year as an Army nurse in Viet Nam during the war. This is her first book. She has published short fiction and non-fiction in an eclectic variety of magazines, newspapers, anthologies, internet and audio media, and co-edits Vestal Review, a literary magazine for “Flash” fiction. She lives in Brooklyn.

Refreshing maturity and a profound sense of compassion. … Focused and sympathetic, this is a valuable contribution to the mostly macho literature of Vietnam

With remarkable restraint and uncommon poignancy, O’Neill … delivers assertions of humanity from the depths of a barbarous war.

This collection of short stories is unique in its representation of a group from whom we rarely hear in the literature of the Vietnam War: the women who were sent there. Of course, these are not stories of combat, since at that time women weren’t involved in the battlefield. But they were in nurses’ uniforms and they were USO aides, and in other ways, too, they served in the war. Consequently, O’Neill’s stories are of people who fight their battles outside the combat zone: a hapless grunt falls from the height of seven feet and now doesn’t feel anything from the waist down, a nurse determines the future of her out-of-wedlock child, and another nurse finds both the privileges and the perils of rank. Don’t mean nothing is actually a term that, along with other expressions, had meaning to those who were “in country” in Vietnam. That the war haunted so many who participated in it is shown by the fact that O’Neill waited 30 years to give voice to her feelings in these stories.

We’ve heard these Vietnam tales before, but never from this point of view. . . . A valuable addition to the literature.