Contributions to Literature: A Tribute to Small Press Books 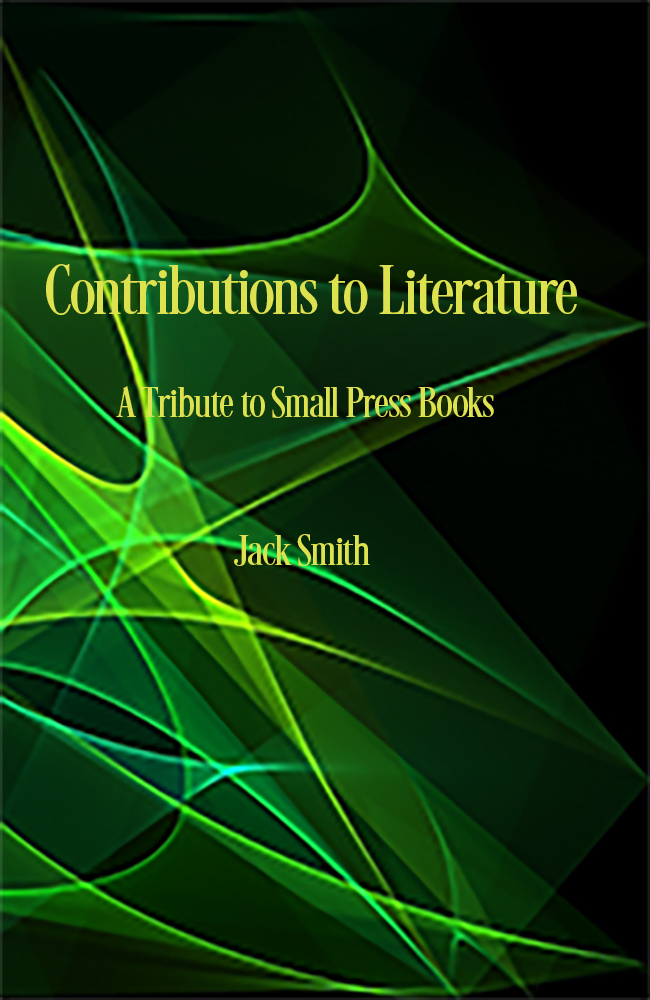 AMAZON
It’s important to authors to get their books reviewed, not just to increase sales but to have them recognized for their contribution to literature.  This is especially true for small press books, which might be ignored. The reviews in this collection are of small press books, ones which I believe deserve to be recognized for their contribution to literature.
Author: Jack Smith
Paperback : 224 pages
ISBN-10 : 1947175572
ISBN-13 : 978-1947175570

Jack Smith has published six novels: If Winter Comes (2020), Run (2020), Miss Manners for War Criminals (2017), Being (2016), Icon (2014), and Hog to Hog, which won the 2007 George Garrett Fiction Prize and was published by Texas Review Press in 2008. He has published stories in a number of literary magazines, including Southern Review, North American Review, The Texas Review, In Posse Review, Word Riot, and Night Train. His reviews have appeared widely in such publications as Ploughshares, The Georgia Review, American Book Review, Prairie Schooner, Mid-American Review, Pleiades, The Missouri Review, and Environment magazine. He has published numerous articles in Novel & Short Story Writer’s Market and is a regular contributor to The Writer magazine. He has publish two books on creative writing: Write and Revise for Publication: A 6-Month Plan for Crafting an Exceptional Novel and Other Works of Fiction (Writer’s Digest Books, 2013) and Inventing the World: The Fiction Writer’s Guidebook to Craft and Process (Serving House Books, 2018). Besides his writing, Smith was fiction editor of The Green Hills Literary Lantern, an online literary magazine published by Truman State University, for 25 years. He presently teaches for Writers.com.

For the past twenty-five years, Jack Smith, prize-winning novelistand founding editor of the nationally recognized literary journal GHLL, has been committed indefatigably to enriching the reader’s understanding by reviewing books of small press authors he has deemed deserving for their contribution to literature. Often lesser known, they have been increasingly shut out by mainstream publishers and a shrinking cultural attention span. As one of the fortunate beneficiaries of Smith’s critically astute and insightful analyses included in this collection, I commend his originality and meticulous account of each work’s merits, enlightened by the universe of renowned writers he has taught and admired throughout his noteworthy career.

In this “Tribute to Small Press Books,” Jack Smith—literary editor, novelist, critic, and philosophy teacher—recommends a league of his own, one in which I am proud to be included. As there was no “great tradition” before the critic F.R. Leavis invented one, so here Smith is drawn to fifteen contemporaries because of his affinities for “the disturbing,” “the dark, absurd, quirky,” “literary realism,” and “memoir and essay,” but more importantly for portrayal of the “human” (meaning our common natures and worth). Of course, he also praises each writer’s social awareness, stylistic range, humor, craft, and key themes. And the collection as a whole proves capacious, moved, and moving.

Jack Smith is a boundary worker. He labors in and mines the “in” in between. In those spaces between genres and forms, he effortlessly discovers the content that attracts his bright-eyed attention and beyond umami taste while at the same time he deconstructs the category itself of “review” with these new reviews. Coyote, Raven, Anansi, Hermes, Trickster—we need him on those brittle walls, tearing down those walls. Jack Smith’s reviews and essays range and baffle, defamiliarize and rematerialize what has been written, writing, and writing about writing. This little blurb is but a tiny remora greedily attached to this irresistible force, this the basking shark of a book.