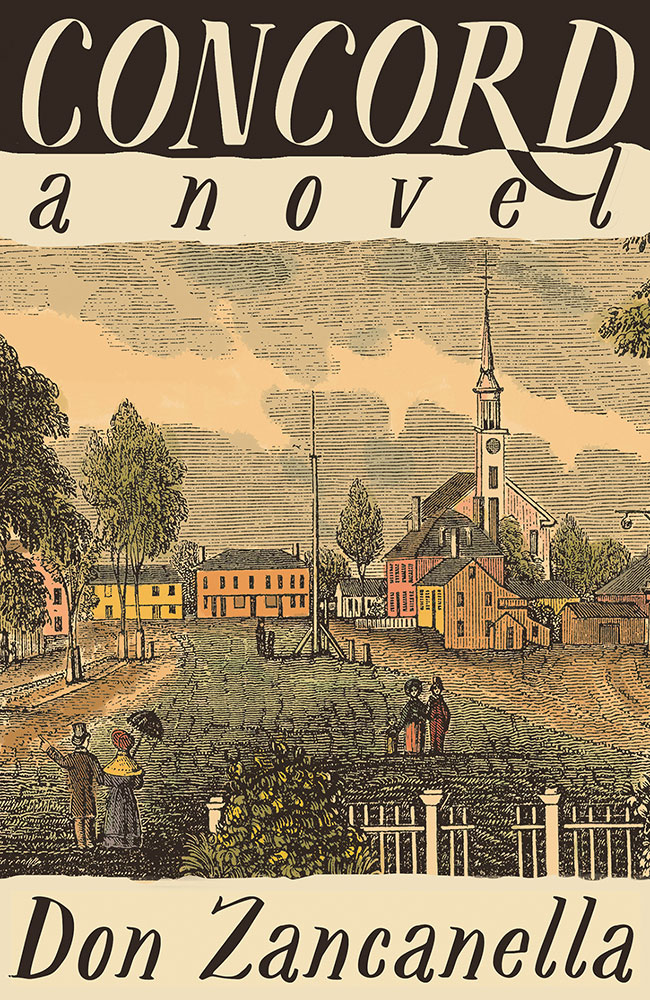 AMAZON
CONCORD tells the story of a single remarkable year when Henry David Thoreau and his brother John fall in love with the same girl; reclusive writer Nathaniel Hawthorne courts Sophia Peabody of the esteemed Peabody family; and the brilliant Margaret Fuller becomes a houseguest of the equally brilliant but married Ralph Waldo Emerson and finds herself engaged in a passionate affair of the mind as well as the heart. Today, these figures are icons of American literature but once they were young and in love.

Don Zancanella is the author of Western Electric, which won the John Simmons/Iowa Short Fiction Award. He’s the recipient of an O. Henry Prize and has published widely in literary magazines. After many years in New Mexico he now lives in Boise, Idaho, with his wife and their assortment of rescue dogs.

Don Zancanella’s gloriously vivid novel is time-travel of the most evocative sort—viscerally palpable, and far less dangerous than a nuclear-powered DeLorean! In these pages, a reader lives among well-known writers and thinkers as they go about their days, sharing in their quotidian satisfactions and trials as well as their public triumphs and disappointments, their greatest personal losses and most intimate pleasures. Not since Colm Tóibín’s The Master, or Rachel Cohen’s A Chance Meeting, have I felt so wholly immersed in the literary world of another time. Concord is a fascinating look at how these thinkers influenced and spurred one another to the works for which they’re known, but it’s also a book of interwoven love stories. These are the very real, embodied people behind the classic texts—the human beings who longed and lusted, desired and lost, who yearned for things and people they couldn’t have—and some they could! and did! Their lives were shaped by ideals and dreams, yes, but also by ordinary circumstance, practical necessity, and by daily interactions with the intimates we don’t so often read about. We struggle alongside Thoreau over the wording of a love letter, worry with Margaret Fuller about the seating arrangements at one of her Conversations, and watch out the window beside Sophia Peabody to see if her strange but intriguing neighbor, Nathaniel Hawthorne, might pass by. Beautifully rendered and wholly engrossing, Zancanella’s Concord gives us the characters behind the classics, and is very much a classic in its own right.

—Thisbe Nissen, author of Our Lady of the Prairie and How Other People Make Love

Don Zancanella’s delightful novel Concord follows a “coterie of eccentrics” as they fall in and out of love with one other, and with ideas about what their lives and societies might become. That some of those eccentric ideas have since become famous is one of the pleasures, but not the point, of this vivid, intimate novel that channels both the bold and the hidden voices of history.

—Caitlin Horrocks, author of The Vexations and Life Among the Terranauts

This enthralling novel depicts Thoreau and his contemporaries not as the cultural luminaries they became but as young adults whose futures were being shaped by their passions and choices, by their triumphs and losses. Zancanella animates this moment of possibility through rich characterization and new insight. His portrait of 1840s New England reveals it to be both wonderfully ordinary and the most interesting place in the world.”

—Elise Blackwell, author of Hunger and The Lower Quarter

Zancanella brings his characters—who happen to be among the foundational characters of American culture—to vivid and altogether human life. By the end, we feel that we’ve gotten to know their hearts as deeply as we already knew their minds.”