All the Dark We Will Not See 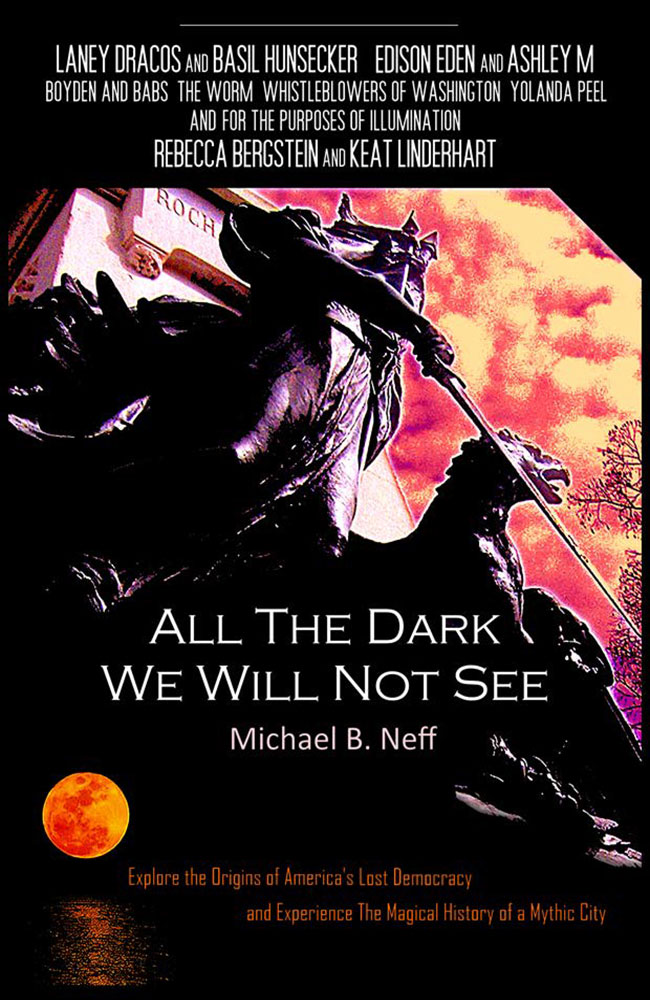 The place is Washington, D.C., and the year,1984. The ruthless dictatorship envisioned by George Orwell has not come to pass. Or has it? Under the presidency of a former Hollywood actor, the struggle for America’s soul has begun-a trial of conscience and idealism versus idolatry and political dictatorship. The White House and its minions intend to shield the government from real public scrutiny, and with hundreds of billions at stake, any means necessary will be used to protect the corporate mobsters who now pull strings and triggers in every agency from the “Star Wars” Pentagon down to the to the trash collecting GSA. But it won’t be easy.

A resistance movement composed of rebellious government workers has formed, and they call themselves, The American Watch. Their leader, Laney Dracos, is a powerful government insider with strong ties to Capitol Hill. Like her partisan companions in the Watch, she rejects cooperation with the regime and plans for Its demise with the help of the fourth estate. However, when a naive new co-worker, Edison Eden, becomes an overly enthusiastic sidekick in her war on corporate Washington, she is inevitably forced to choose between her honor or her life.

Michael B. Neff worked in Washington, D.C. during the Carter, Reagan, Bush and Clinton administrations, leaving shortly after George W. became president. He has lobbied the Senate for greater whistleblower protections and in 2002 joined with the ACLU to successfully defeat Internet censorship laws in Michigan and Arizona. As a government worker, he held jobs in managerial and budget-analyst job series from NASA to GSA. Always an avid writer, his work has appeared in such literary journals as North American Review, Quarterly West, The Literary Review, and Conjunctions. He now directs the Algonkian Conferences, helping new writers get published.

All The Dark We Will Not See is a compelling, utterly original novel that savagely and hilariously explores what went wrong in this country a couple of decades ago, and that keeps going wrong even now. Neff is a raucous new voice in American literature.

Michael Neff’s debut novel is a stunning performance— a book that puts me in mind of Mark Twain after a ten-year prison term locked in a cell with Laurence Sterne.