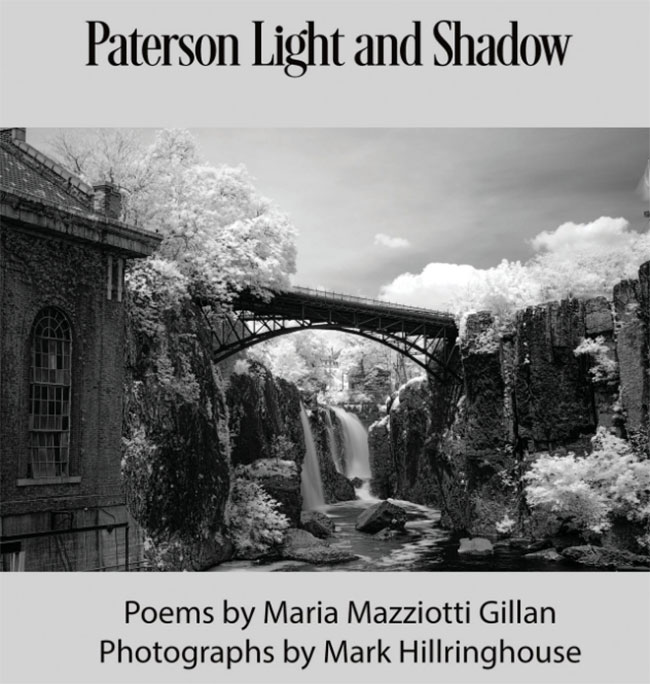 Paterson Light and Shadow tells the stories in poetry and photography of Paterson, New Jersey, from one of the most gifted poets, Maria Mazziotti Gillan, and fine art photographer Mark Hillringhouse, who together have spent a lifetime living, growing up and working in and around one of America’s most important historic industrial cities.

In her signature style, Gillan combines sublime moments with gritty detail when she writes about growing up as a working class Italian immigrant as in the lines from the poem In the Still Photograph, Paterson, New Jersey, Circa 1950: “The rough feel of a washcloth / and Lifebuoy soap against my face, / the stiff, starched feel of my blouse, / the streets of Paterson, old and cracked, / the houses leaning together / like crooked teeth…” Hillringhouse’s award-winning black and white Paterson photographs accompany each poem and resonate with the mood and feeling of Gillan’s writing in crushed velvety blacks and grayscale tones that evoke the moods of this city’s past and its urban decay.

This collection contains over thirty poems and thirty photographs that together explore the hallowed precincts of this once great industrial city, envisioned by Alexander Hamilton as the birthplace of manufacturing in a new nation, a city now home to countless immigrants who still struggle to work and to build lives and survive.

Maria Mazziotti Gillan is a recipient of the 2014 George Garrett Award for Outstanding Community Service in Literature from the Association of Writers & Writing Programs (AWP), the 2011 Barnes & Noble Writers for Writers Award from Poets & Writers, and the 2008 American Book Award for her book, All That Lies Between Us (Guernica Editions). She is the founder/executive director of the Poetry Center at Passaic County Community College in Paterson, NJ, and editor of the Paterson Literary Review. She is also director of the Binghamton Center for Writers and the creative writing program, and professor of English at Binghamton University-SUNY. She has published 22 books, including What Blooms in Winter (NYQ Books, 2016); The Girls in the Chartreuse Jackets (Cat in the Sun Books, 2014); Ancestors’ Song (Bordighera Press, 2013); The Silence in an Empty House (NYQ Books, 2013); Writing Poetry to Save Your Life: How to Find the Courage to Tell Your Stories (MiroLand, Guernica Editions, 2013); The Place I Call Home (NYQ Books, 2012); and What We Pass On: Collected Poems 1980-2009 (Guernica Editions, 2010). With her daughter Jennifer, she is co-editor of four anthologies. Visit her poetry website at mariagillan.com. Her poetry blog is Artist website mariamazziottigillan.com. Her artist website is mariamazziottigillan.com.

Mark Hillringhouse: is a published poet, essayist, and photographer whose works have been widely exhibited in area galleries. His photography and writing have been published in The American Poetry Review, The Literary Review, The New York Times, The New Jersey Monthly, The Paris Review, and in many other journals, books, anthologies and magazines. He was the founding editor of The American Book Review, and a contributing editor for The New York Arts Journal. Thrice nominated for a Pushcart Prize, and a three-time recipient of a New Jersey State Council on the Arts Fellowship, he has won several awards for poetry and photography including the National Parks Calendar photography contest and the Soho Arthouse Gallery’s “Captured! A Moment in Time” exhibition. His film documentary with collaborator Kevin Carey on the life of local Salem poet Malcolm Miller, titled Unburying Malcolm Miller, was released in 2017 and screened at the Massachusetts Poetry Festival. His book of poems and photographs titled Between Frames was published by Serving House Books. He is a member of the English and Fine Arts Department at Passaic County Community College. Visit his photography Website.

In Paterson Light and Shadow, Maria Mazziotti Gillan writes her beloved city with transforming courage: In the city of dreams no one dies, she says, all the while we witness the lives of immigrants—her father who worked at the Royle Machine Shop and swam the Passaic River, the daily poverty and relentless spirit of the dreamers of Paterson. These fierce and lovely poems speak to the wonderful photographs of Mark Hillringhouse as she sings the road back to the 17th Street kitchen with its big black coal stove. No one writes with the heart and soul of Mazziotti Gillan—from the depths of loss to the still shimmering happiness.

Paterson Light and Shadow is a fascinating collaboration between poet Maria Gillan and photographer Mark Hillringhouse. Maria Gillan’s poems evoke the warmth of a childhood in the home and neighborhood created by Italian immigrants. Outside in the WASP world at school, it was a colder place where all that made her life sweet at home made her ostracized and demeaned.These poems and photographs also show the transformation, typical of so many American cities, from bustling hub of manufacturing with a lively downtown to a shell marked by decay and unemployment. Gillan gives voice to a past generation of the city and current desolation.

This partnership—the alliance of the two of them, Maria and Mark—is seamless and powerful. This is an amazing book.